Kiska at Globsec: Our values are our strongest survival weapon 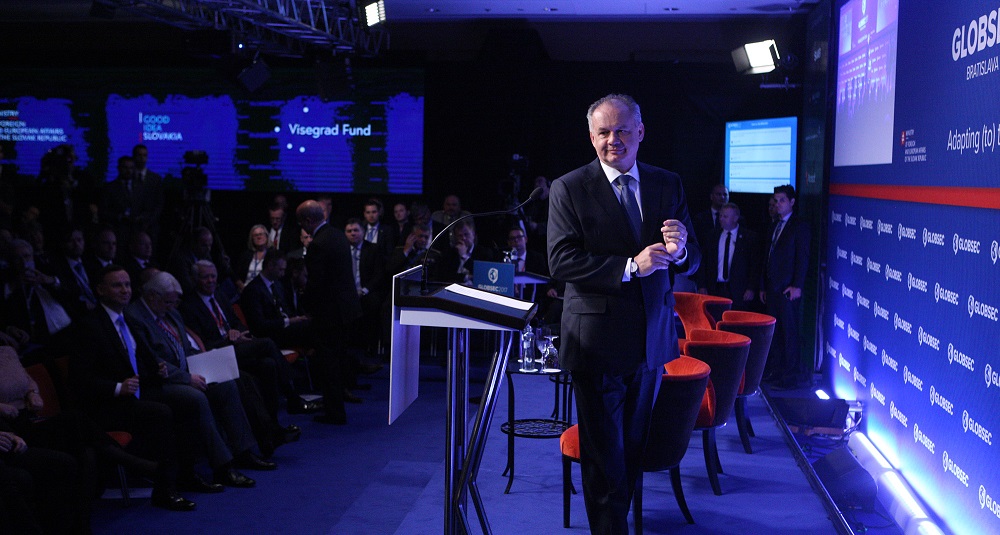 "It's been only few hours since I came back from NATO summit in Brussels. This one was highly anticipated. Not surprisingly — it was the first summit of head of states and governments with the participation of the new US president. And let’s be honest, in months since the US elections many of us in this room were worried about what to expect. Fortunately, our transatlantic bond is as strong as ever. We stick together, we guard each other’s back. The Alliance remains the backbone of our security. And moreover, we have a new ally on board — Montenegro.

All 28 member states are determined to fulfill their share of responsibility. This is also important for me personally as the president of the Slovak Republic. Some of you may know that I’ve been very vocal about the half-hearted attitude of our authorities towards our NATO commitments. So I was pleased to announce yesterday in Brussels that the government approved Slovak contribution to securing our allies in the Baltics through so-called enhanced forward presence. Moreover, we will join up fighting terrorism efforts of the Alliance by deploying Slovak troops to Iraq.

I also reaffirmed the commitment of the Slovak government to allocate more resources to the defense budget. Last week, the Slovak parliament approved historically the first Declaration on defense spending. It underlines the basic fact that our security is not a question of political partisanship, but a matter of common responsibility towards our citizens. And that it cannot be provided by others, but it can only be shared.

Our people naturally want to live their lives without fear. Be it in Slovakia, Estonia, or France. But whatever resources we spend on defense, it may never be enough. To feel secure, we need trust in our collective will. Leaving no room for doubts that we would ever think twice before coming to help each other. This should be a clear message of all leaders of our Alliance to anyone who would like to test us.

So on the surface, it seems that after turbulent months full of uncertainty about the future, we finally managed to deliver some good news. I am not going to dispute it. But… as some of you may know… there has always been some “but” in my opening speeches here at Globsec. This time won’t be different. There are three things that worry me and I want to address today.

First: we struggle lately to maintain institutions of the West — be it NATO or the EU — as fellowship of truly democratic countries based on common values.

Second, we allowed the enemies of the free world to get into our heads, to meddle too much in our own affairs.

Third, we let our elections to be deformed into a survival game of our democratic destiny.

So let me elaborate a bit more on the first point. I want to stress this: the West is not only a geographic concept. The modern West is a decades old and value-based partnership — with NATO and the EU being the two institutions vital for our survival. That said, the European Union is not just another trade area, but the single most important project of peace and prosperity in the history of our continent. NATO is not a purposive firepower pool that bunch of countries put together to defend themselves. Surely, we are the alliance of common interests, but more importantly we are the alliance of common values.

It’s the core of what we are. It's unquestionable part of our security. Our values are our strongest survival weapon against any enemy. That’s why we can act globally as the advocates of human rights and respect for the dignity of every single human being. Our values are the unique reason why we are the “good guys”. Whether it is freedom of speech, freedom of media, respect for NGOs or fight for good governance, none of them can be betrayed. Without a genuine will to tender democratic principles in every single member state, our ability to act together could be compromised.

Now, let me explain my second point. What I mean by talking about our enemies getting into our heads especially holds true here in Europe. To put it simply: we should stop helping them to paint a picture of gloom and doom of Western civilization. Surely, we’ve been facing many challenges and security threats recently. Maybe too many in a short period of time. We are all horrified by terrorists targeting our people and our peaceful way of life. They murdered 22 innocent young men, women and kids again in Manchester this week.

Also, there are challenges in the EU we have to solve. Lot of hard work is needed. And there is always plenty of ways how something can go wrong. So my intension is not to downplay the difficulties of our situation. Or to underestimate the tasks we face individually and together. But let's stop playing the game of the enemies of the peaceful and prosperous West. Let's stop creating this picture of apocalypse just waiting to happen. Let's stop supporting the narrative of the EU and NATO being on the verge of a terrible irreparable breakdown. Let’s stop seeing the need for revolutions and radical solutions when in fact what we need is old-fashioned politics and sober policies. Because what I see in our countries is still the best, the most prosperous, the most secure and stable place on Earth for people to live in — by far.

And finally, my third point, which I think is the unfortunate outcome of the first two. We all have been reminded by recent elections how fragile our democratic societies could become — once they are under combined pressure of dissatisfied voters, targeted anti-Western propaganda and weak response from our political leaders. I think I will speak on behalf of all of us here, when I say that we have learned our lesson.

We have witnessed too many attempts to hack our democratic societies recently. There is no need to play the Russian roulette about the end of NATO, the EU or the whole Western civilization every time our people exercise their freedom to vote. We have seen enough. Now our task as political leaders is to make our elections boring again. Seriously, we should do our best to calm down election races to battles of ideas stemming from our democratic societies, not battles for survival of our democratic world. The elections in Netherlands, in Austria and most recently in France, paved the way in right direction. They demonstrated that we can rely on our public when we show determination to find solutions and political courage to defend our common principles and values.

Ladies and Gentlemen,
Georgian President Margvelashvili — a good friend of mine — officially visited Slovakia recently. And you all know how difficult times his country and its people have had to go through. I asked him how they manage. He answered: “Although complicated, the current situation is not a problem. The problem will be, if we give up on our moral imperative and stop fighting for what is right.”

I agree. If we build the strength and resilience at home, we can be more confident when dealing with international crises. Grave breaches of international law in Georgia and Ukraine, atrocities committed on civilians in Aleppo and several other cities in Syria and Iraq are important reminders that our ability or inability to act decisively is crucial.

We can't ever forget what defines us. Although we face many challenges, and are busy with various problems, let our values and principles guide us. That is our single most important security policy — our unique adaptation toolkit.

Thank you very much for your attention."