A A A
Slovenčina

President Kiska: We need Europe that is united 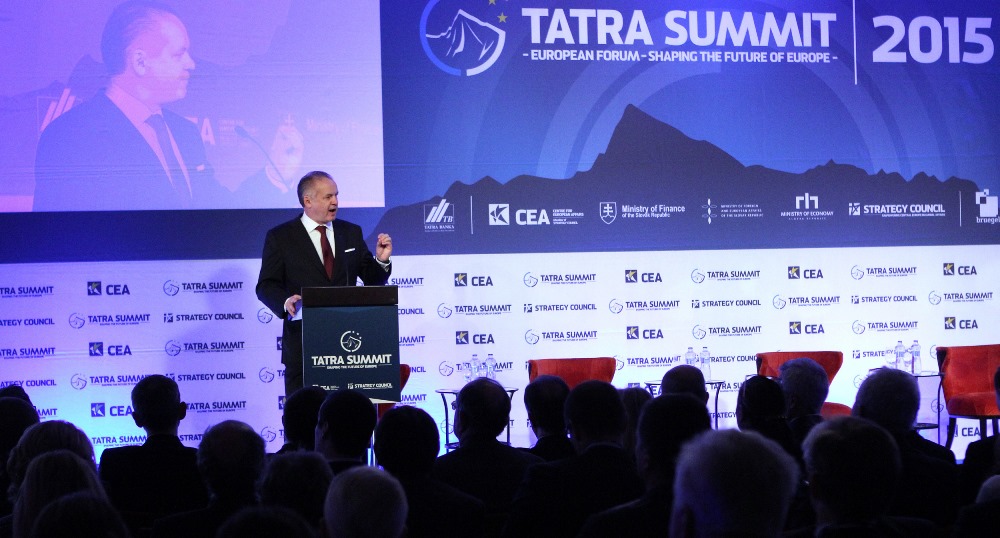 On Thursday, President Andrej Kiska addressed the TATRA Summit with a speech on the challenges for the European Union:

The last farewell to a great European Mr. Árpád Göncz is taking place tomorrow. The first President of Hungary after the fall of the Iron Curtain who spent his life-time battling against totalitarian regimes and dictatorships. And against divisions in Europe.

Let me use words of the President of the European Commission Jean-Claude Juncker who has rightly said: „Men like Árpád Göncz rarely come along in the history of a nation, or even a continent. A true European, a man who lived by the strength of his moral convictions and remains to this day a source of inspiration“.

Ladies and Gentlemen, in the memory of the Honorable Árpád Göncz, a true and devoted European, I would like you to join me for a minute of silence.

You are all here to speak about Europe. To exchange views how we are doing and where we want to go. As the subtitle of the conference ambitiously states — to shape the future of Europe.

I have to say that at this time it is not the question of how to shape the future of Europe that is being widely asked. Too often we hear a different question. How to save Europe and whether there is enough political will to do it.

What we see these days, is the return of political rhetoric which divides Europe. Into the West and the East. Into the Old and the New member states. And I am truly concerned about this rebirth of outclassed divisions in Europe. Because words always reflect the will. Words reflect the way of thinking. Words mobilize. And words also signal decisions and processes as their follow-up.Dangerous spirit of this language and revival of the ghost of past cannot be underestimated. We need to ask, what has caused this dividing rhetoric to re-appear?

In Europe today, we struggle with many problems of a critical nature. Crisis has become a daily routine. Extraordinary meetings of heads of states and governments become somewhat ordinary. Greek financial crisis. Russian aggression towards Ukraine and previously towards Georgia. And certainly migrant and refugee crisis which is widely labelled as the biggest crisis of our time. Even the most serious one since the end of the Second World War.

And frankly speaking, the whole picture we are delivering gives impression of a slight panic — not just to our own citizens but also to the rest of the world — about the very existence of the European Union. From the threat of losing comfortable unrestricted Schengen traveling, warnings have sadly peaked to fears that this crisis will bring about nothing less than a collapse of the European social order and speed up a dissolution of our European project.

I do not underestimate the scope of this crisis. It really is some serious challenge — humanitarian, security, economic, certainly also moral. It goes without saying that it cannot be handled by one or two countries.

I do not underestimate the fact that we are unable to control the Schengen borders and the borders of the European Union. This is a serious problem for Europe.

I do not underestimate that we are unable to distinguish more effectively between migrants deserving international protection and the ones which only exploit the situation and come for other reasons.

This is a serious challenge for Europe, in particular for several countries. But the question as it comes up today is whether a million or even two million migrants, many of them getting away from war, violence and misery, could really bring the end of the European Union as we know it?

We are talking about the wealthiest part of the world, with population of more than 500 million, with ambitions of a world leader or even an economic and political super power. How do we compare to other regions or countries which shelter millions of refugees for many years? Jordan, Turkey or Libanon — a country of less than five million which provides refuge to more than one million Syrian refugees.

If we are unable to handle this situation, what message does this panic tell the world about us? Should our citizens — and also the whole world — think that our project has been built only for good sunny days? And instead of acting together when we are confronted with problems, selfish — in many cases politically shortsighted -- national politics prevails?

Do we really feel or think that whatever problem or challenge arises, we can solve it better and more efficiently individually? Or simply by cherry picking here and there in what kind of situation it suits us to be Europeans and when we can pretend otherwise?

I am convinced that if, as some say, the very existence of the European Union is truly at stake then we have a serious problem. And we have to get back to fundamentals — to the idea of Europe whole and free, based on humanity and solidarity, for states and nations across the united continent.

I believe in Europe — in Europe of solidarity, responsibility and humanity. I believe in its capacity to overcome this and other crises. The solution is certainly not in divisions. We need Europe that is united. Because the strong and successful European Union is in finding solutions together. But we also need Europe which is ready to take action.Promptly and jointly.

Through enlargement of the European Union, the countries of the East, of the former Soviet bloc, joined the West. We all worked hard for many years to overcome previous divisions. It took a great deal of political capital, huge effort to succeed in difficult reforms together with a lot of resources to enable this integration — on both sides of destroyed Iron Curtain. All this aimed to achieve what was called “Europe whole and free”.

This principle of “Europe whole and free” must be essential also for us, in our region called the Central Europe. Let's not forget about our moving and dangerous past. Thanks to the reunification of Europe potentially unstable region was pulled back to the West.I am convinced that the founders of Visegrad cooperation had this on their mind too, while firmly believing that we will never allow dark past of divisions to return.

It would be very unfortunate to forget about this European keystone of our regional development and cooperation. It would be unwise to abandon this vital and maybe the single most important force behind Visegrad Four success. It would be against our strategic interest, against our common sense to turn Central Europe into some trouble-making block inside the EU allied by trivial, selfish and short-sighted „blame-it-on-Brussels“ political agenda.

That holds true for Slovakia itself. Strategic political course to establish our country firmly in the core of the European integration has never been put in question. Neither by governments, nor by major political parties or majority of our citizens.But it has to be proven especially in the times of crisis. Both around the table in Brussels and at home. Because the strong and successful European Union is our major national interest. We have all to lose, if uncertainty prevails and pessimistic predictions are to happen. And this risk will remain present in case policies in individual countries will start to be guided by a principle of “everyman for himself”.Because the idea of “Europe whole and free” needs a common effort. It cannot be cherished only on individual bases.

In few months Slovakia will take over, for the first time in its history, the six-month EU presidency. As I said in my recent address to the Slovak Parliament we have a chance to convince our partners that Slovakia’s heart is sincerely on the side of the common Europe and that our character is an important contribution to it.