President Kiska at the UN: We have to cooperate 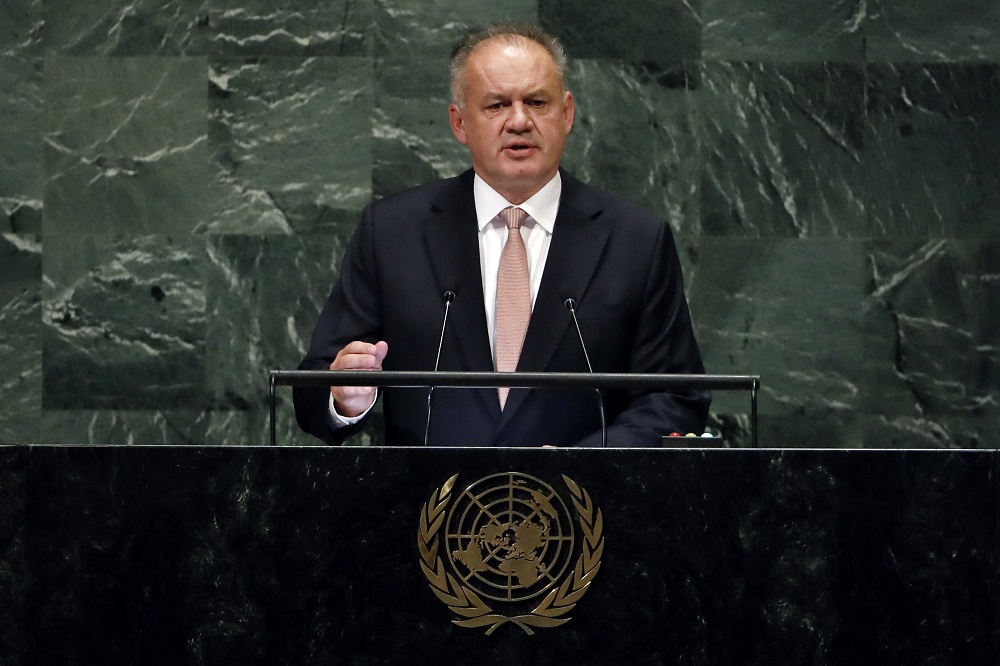 Prezident Andrej Kiska held a speech at the United Nations General Assembly. During his working visit in New York on Wednesday, he also visited the Bloombeg Business Forum and met with the presidenet of Georgia Giorgi Margvelashvili and the secretary general of the UN António Guterres.

"It takes decades to build peace and trust. But it takes seconds, one selfish or narrow-minded decision, to break them.

We gather here every year to enhance what we have been building for over 70 years. An idea of world based on rules and principles of humanity, responsibility, tolerance, and peaceful coexistence. Where wars and armed conflicts have no place. Where disputes are solved in dialogue. And where challenges are addressed in cooperation.

We are continually becoming wealthier and more advanced. With all the resources we can generate together, we may have all the means to reach even the poorest of the poor. And yet, we are more often driven by selfishness and short-term interests. Instead of enlarging freedom, cooperation and healthy competition, we introduce restrictions and trade wars.

While globalisation has created unprecedented wealth, inequalities are still dividing this planet. The economic figures are positive, but they get hardly translated into improved well-being and dignity of every human being in many parts of our world.

In an amazing pace we continue developing technologies which allow us to connect, communicate and be closer globally. But the distance between people, the gap in understanding and empathy towards other cultures are still huge.

And yet, thanks to innovations the world has never been smaller. What happens thousands of kilometers far from us can turn into a global problem in a matter of minutes. The global problems have direct impacts on our citizens.

In this situation, the United Nations plays an irreplaceable role. It has an enormous potential to overcome these paradoxes. Its strong principles, responsible action and the driver for cooperation are what makes it so unique.

Let me touch upon these in more detail.

The rules and principles and their enforcement must remain a backbone of this organization. Because today it seems that playing by the rules have become old-fashioned. As if ignoring them was a sign of strength. And respect a sign of weakness.

The number of armed conflicts has increased in the recent years. Only in 2016 and 2017 the number of conflicts reached the peaks of the Cold War era. The civilian casualties rise. We are talking about hundreds of thousands of innocent people directly affected by conflicts and wars.

Sovereignty and territorial integrity are the DNA of stability and security — globally and regionally. But the occupation of Georgia and Ukraine and destabilisation in the region are just one of many examples that the respect of rules is being replaced by ruthless power politics.

The threat of nuclear weapons resonates much more often than we could have imagined in the past years. We hope that the current developments in North Korea will bring tangible results. We must make sure that agreements will be kept. And if not, we need to act with resolve.

Too often we see thousands of civilians massacred by their very own regimes or in endless conflicts. As if we became immune to the breaching of the very norms of humanity and stopped counting the innocent lives in Syria, Yemen, Palestine, Myanmar, South Sudan and elsewhere. Together we have agreed that using the weapons of mass destruction will be unacceptable without exceptions. Any use of chemical weapons must be a red line to our tolerance. An automatic trigger for resolute actions. So it is shameful to see repeated use of chemical weapons against own citizens for the sake of survival of a tyranny in Syria. Or for us, Europeans, shockingly, the attacks in Salisbury in Great Britain with the perpetrators avoiding responsibility and shamelessly denying facts.

It is our responsibility to make sure that no perpetrator will escape unpunished. We must firmly show that we do not bent our principles to aggressive politics. That we will not undermine the authority of this organization by inaction.

We all have a great responsibility towards our citizens, towards international community and this planet. To lead, to stand firmly behind our values, to defend them. We must listen to our people to address their problems. But also to see far enough to inspire them.

Particularly vis-a-vis extremism, populism, radicalism, xenophobia or racism. Propaganda, lies and twisted truths. Or terrorism. Their goals are simple and yet effective — to spread fear, hatred and doubts. To erode our beliefs and values. To undermine our unity. They provide seemingly quick and simple solutions provoking confrontation and drawing dividing lines.

It is not a surprise they find a fertile soil everywhere we fail to deliver. People living in poverty, starving of hunger or diseases, with no access to education or health care, are one of their natural targets. And we will not win this fight if we do not offer these people and their children a hope to live a better life in dignity, free of fear of hunger or death.

That is why our unity in implementing the development goals, in fighting the climate change or addressing migration is so important. We need to turn our plans and our promises into a global reality. Failing to do so only sends a signal of our weakness, leaving these people and this planet as an easy prey.

Unprecedented progress in innovations and new technologies brings new challenges. I am very much concerned about malicious activities in cyber space. Growing manipulation in social media is undermining democracy worldwide and indoctrinating our populations.

Cyber space knows no borders. It is anonymous and provides unlimited room to strike at us. The choice of means is endless. To manipulate elections, to influence decisions. To spy on us or sneak into our computers, networks and everyday lives. It is as dangerous as any conventional threat. As such it requires our utmost attention. But we don't do anything yet or barely a little. The global companies prefer their profits to their responsibilities.

So it is up to us, the states, to set new standards and where needed, regulations. Because today we do not lead. We only follow. And the price of inaction may be soon very, very high.

Too often, we hear political leaders calling to fight extremism and propaganda with the same tools and rhetorics. They can't be more wrong. The only honest answer is to support tolerance, freedom of speech and critical thinking in our societies. The only potent defense is to reinforce our values and to bring candid solutions to people's problems. Only when we deliver, our electorates may become immune to extremist ideas and propaganda.

In this effort, we need to remember that free media are our allies not enemies. They are guardians of our principles. They are often the first to spot when things go in the wrong direction. They keep those, who break the rules, accountable.

So we should be very much worried about increased attacks on journalists, attempts to eliminate the freedom of press and growing restrictions on civil societies. Sadly, last year dozens of journalists were killed. Hundreds were imprisoned and thousands oppressed. The climate of hate continues to spread portraying them as enemies of the state, as the enemies of nation or even faith. But they play a key role in our mission for the better world. And as such they must be protected.

Cooperation. None of our countries, even the most powerful ones, is big enough to face the current challenges on its own. Be it migration, terrorism, climate change or solid economic growth.

While our most important duty of us, the politicians, is to serve our people, it will only be possible if we understand the value of cooperation. If we understand that if we truly want to change this world and this planet for better, we need to think of others – individuals, nations, and countries. And patiently explain this principle to our people.

As Kofi Annan said: “More than ever before in human history, we share a common destiny. We can master it only if we face it together. And that, my friends, is why we have the United Nations.”

I admit that multilateralism is not always an easy way. But it is the only sustainable one. The United Nations will serve its purpose as long as we, the member states, stand true to our commitments. For as long as we respect the rules and principles and will be ready to defend them.

Because the noble idea and strong principles of this organization – the true values of tolerance, empathy, compassion and solidarity are the best equipment for us to face any challenge.

If we protect these values — the moral compass of humanity, then the evil of aggressive power politics, selfish nationalism, extremism or racism shall not prevail.

Dear friends, we may not know what comes tomorrow. But we may know how to respond if we let the moral compass guide us. And it is the best assurance we can have in the times of uncertainty. To protect our values.

Excellencies,
I wish to conclude by congratulating Madam President on herr assumption of the Presidency. The challenges I spoke about are not easy to tackle. But she has full confidence in the United Nations and her office that she will steer this Assembly through these times with utmost dedication to fulfill our common goals.

For what I also wish to proudly thank and congratulate to her predecessor Mr. Miroslav Lajčák — for a professionalism with which he served the United Nations and its peoples.