President: The Pope is the most cherished man I could ever meet 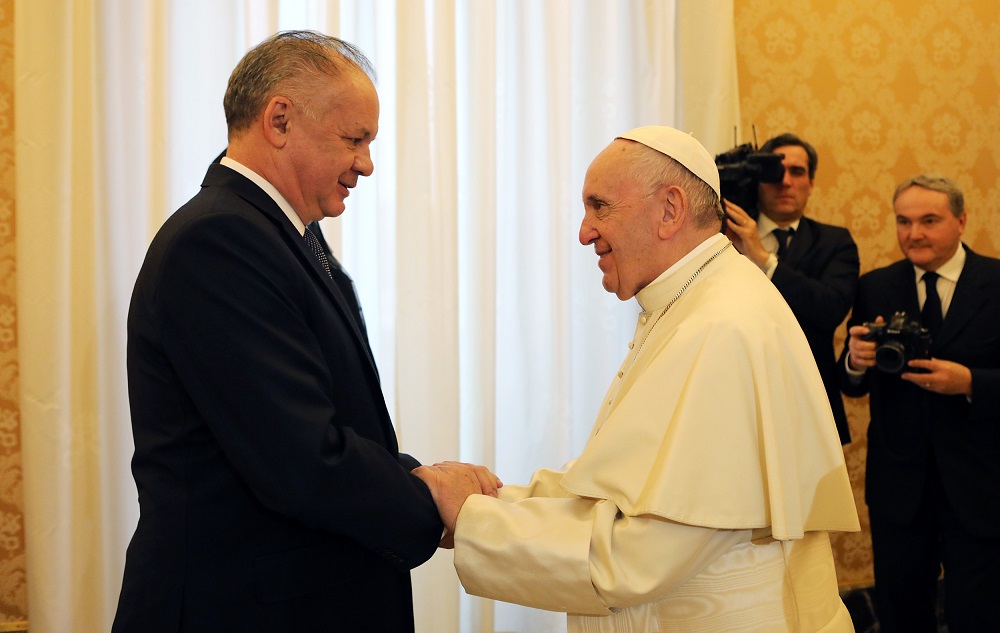 Family, humility and forgiveness were the themes of Friday’s talk between President Andrej Kiska and Pope Francis in the Vatican. The Slovak President referred to him “the most cherished man” he could ever meet.

Friday’s audience was Kiska’s second with Pope Francis. Their first meeting took place in the Vatican in 2015.

“The Holy Father is the embodiment of good. I greeted him on behalf of all citizens of Slovakia, especially the faithful who pray for him every day,” Kiska later stated at the press conference at St. Peter’s Square.

He remarked that the Pope was pleased with the gifts he brought from Slovakia. “As I told him the stories of these gifts, I could see tears in his eyes,” Kiska said. Four decorative Christmas balls which the Pope received from the head of the Slovak State were made by children from the Children’s Home of St. Joseph in Turzovka, mentally disabled children in Košice, children from the Roma community in Spišský Hrhov and homeless people from the Resoty Center in Bratislava, which was founded by Rev. Anton Srholec.

Kiska also pointed to the prayers that the homeless had written for the Pope on their Christmas ball.

The balls will be hanging on the Christmas tree in the House of St. Martha, where the Pope will serve mass every day until Christmas. “They will be close to him and he will always hold Slovakia close to his heart,” Kiska said.

According to Kiska, much of their discussion centered on the family. He recalled how the Pope urged parents to find time for their children. But not only with technology; he wants them to “play together.”

Other topics included forgiveness and the need for humility among people who wield power. “The Holy Father believes that justice must be combined with forgiveness,” the President said.

“We also discussed how to prevent the spread of hatred,” Kiska continued. “In our country, Slovakia, let us call for justice, but let us also forgive. Let us never allow our country to become divided into camps because of hatred,” he emphasized.

During President Kiska’s personal meeting with Pietro Cardinal Parolin, the Vatican State Secretary, he informed him of the economic situation in Slovakia and highlighted the economic growth and dropping unemployment rate. The situation in Ukraine was also discussed, as he mentioned his recent visit there.

The president stated, “the Secretary of the Holy See expressed his conviction that we should talk and meet with Ukraine more and he condemned “Russian aggression” in the east of Ukraine where “people are dying in vain.” According to him, violence and “Russia’s aggression in the Azov Sea” raise concerns even in the Vatican.

They also touched on the topics of climate change and migration. “I expressed my conviction that we should fulfill the Paris Agreement,” the supreme representative of Slovakia stated.

Earlier in the week, Cardinal Parolin participated in the Intergovernmental Conference on the Global Compact for Migration in Marrakesh, despite the Vatican’s reservations towards this document. “But they were there, as opposed to us, and expressed their opinion. This is how every country should behave,” he emphasized.

Kiska also met 94 year old Cardinal Jozef Tomko, the former prefect of the Congregation for the Evangelization of Peoples, who has worked in the Vatican since 1945. According to Kiska, the Cardinal appreciated the healthy self-confidence of the young generation in Slovakia, which he called a “marvelous country.”